Summary Text
Hypertension, a very common condition worldwide, can lead to arteriosclerosis through alterations in the structure of blood vessel walls known as “vascular remodeling.” In a recent study, an international team of scientists unveiled a molecular pathway for the development of arteriosclerosis for the first time. This could pave the way to better medication for preventing and treating hypertension and arteriosclerosis.
Full text
High blood pressure, or hypertension, is a very common condition that can arise from physical activity, stress, or certain disorders. Unfortunately, persistent hypertension can cause long-lasting changes in the structure of vascular smooth muscle cells (the cells making up the walls of blood vessels) through a process called “vascular remodeling.” If left unchecked, this restructuring can stiffen arterials walls, which lose their ability to adjust their size appropriately. This, in turn, leads to arteriosclerosis and increases the risk of cerebrovascular disease.

Why and how hypertension triggers vascular remodeling is not entirely clear. Scientists have shown that macrophages, a type of white blood cells that kill foreign bodies, are involved in the transformation. Specifically, the macrophages accumulate within blood vessel walls from outside the vessels and cause chronic inflammation. However, the underlying mechanism that orchestrates this process remains unknown.

Against this backdrop, researchers from Japan and Canada, in a new study, recently investigated a mechanism known as “excitation–transcription (E–T) coupling” in vascular smooth muscle cells. By unveiling the mysteries behind the E–T coupling in these cells through experiments spanning single cells to whole organisms, they successfully linked the E–T coupling mechanism with vascular remodeling. The study, published in the Proceedings of the National Academy of Sciences of the United States of America (PNAS), was led by Junior Associate Professor Yoshiaki Suzuki, Hisao Yamamura and Yuji Imaizumi from Nagoya City University, Japan, and Gerald W. Zamponi and Wayne R. Giles from University of Calgary, Canada.

Various types of cells are known to undergo E–T coupling. In neurons, for example, an excitation in the form of calcium ions (Ca2+) entering the cell through calcium channels activates certain transcription factors and enzymes. These, in turn, trigger the transcription of various genes. Meanwhile, although E–T coupling also occurs in vascular smooth muscle cells after an influx of Ca2+ under high pressure, not much was known about how it happens, what genes are triggered, and the role it plays in our bodies.

The researchers sought to answer these questions by focusing on caveolae, small structures resembling depressions widely present on the cell’s membrane. Through detailed experiments in individual cells, cell cultures, and live mice, the team found that a specific protein complex found in caveolae is a key player in E–T coupling in vascular smooth muscle cells.

They proved that this complex, referred to as Cav1.2/CaMKK2/CaMK1a, is formed within caveolae and both CaMKK2 and CaMK1a are directly activated by Ca2+ entering through Cav1.2 when subjected to certain stimuli, such as high pressure. Moreover, they showed that this complex activates a signaling pathway that phosphorylates a transcription factor called CREB, which ultimately leads to an increased transcription of multiple genes.

By taking a detailed look at the genes promoted by E–T coupling and observing their effects when blocked or amplified, the researchers made some important discoveries. Firstly, some of these genes were related to chemotaxis, the phenomenon by which cells movement is triggered and directed by chemical stimuli. This helped explain the accumulation of macrophages in blood vessel walls from outside the vessels.

The findings of this study have important implications regarding anti-hypertension drugs. For one, they explain why medications like nicardipine, a classic calcium channel blocker, prevents vascular remodeling and the progression of arteriosclerosis. This not only fills an important knowledge gap in medicine but also presents several potential drug targets for treating or preventing vascular remodeling, such as the constituents of the Cav1.2/CaMKK2/CaMK1a complex.

“About 40 million people suffer from hypertension in Japan alone, and are at high risk of stroke, end-stage renal failure, and vascular dementia,” says Dr. Suzuki, “Understanding the mechanisms behind arteriosclerosis is, therefore, very important for reducing the incidence, progression, and recurrence of cerebrovascular diseases and extend healthy life expectancy.”

Let us hope this new information would lead to better treatments for hypertension and arteriosclerosis in the near future.

About Junior Associate Professor Yoshiaki Suzuki from Nagoya City University, Japan
Yoshiaki Suzuki obtained a PhD from Nagoya City University (NCU) in 2013, where he currently serves as a Junior Associate Professor. He also worked as research fellow at JSPS from 2010 to 2013. He is a lecturer and instructor at the Department of Molecular and Cellular Pharmacology at NCU, and conducts research in the topic of cellular ion channels, from basic science to pathophysiology and potential drugs and drug targets. He has over 40 publications to his name.

The molecular mechanism underlying the development of arteriosclerosis 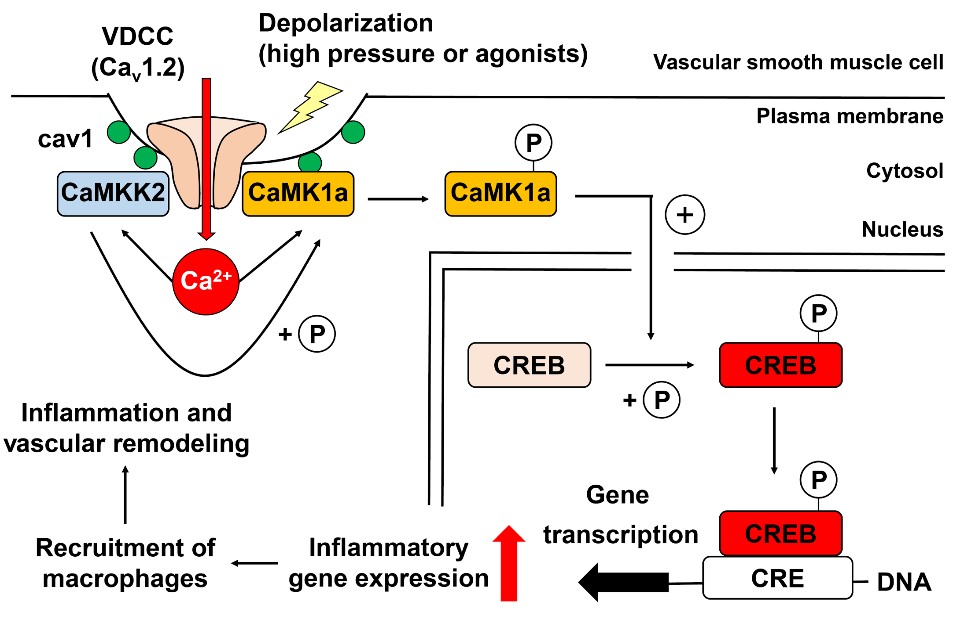 The influx of Ca2+ into vascular smooth muscle cells through Cav1.2 within caveolae due to hypertension activates a pathway leading to inflammation and vascular remodeling. This, in turn, causes arteriosclerosis. The CaMKK2 protein is a potential drug target to prevent this process.