Scientists discover an inexpensive reaction to exchange light hydrogen for its heavier isotopes using silicon surfaces, paving the way to more durable electronics.
Deuterium, a heavier but less abundant version of the hydrogen atom, has many practical applications. Unfortunately, producing deuterium and using it to protect silicon-based semiconductors requires a lot of energy and very expensive deuterium gas. Now, scientists from Japan have discovered an energy-efficient exchange reaction to swap hydrogen atoms for deuterium on the surface of nanocrystalline silicon. Their results pave the way to more durable electronic devices while keeping costs and the environmental impact low.
The discovery of isotopes in the early 20th century marked a key moment in the history of physics and led to a much more refined understanding of the atomic nucleus. Isotopes are ‘versions’ of a given element of the periodic table that bear the same number of protons but a different number of neutrons, and therefore vary in mass. These differences in mass can radically alter certain physical properties of the atoms, such as their radioactive decay rates, their possible reaction pathways in nuclear fission reactors, and much more.

While most isotopes of an element share similar chemical properties, there is one notable exception: hydrogen isotopes. Most hydrogen atoms on Earth contain only one proton and one electron, but there exist hydrogen isotopes which also have one neutron (deuterium) or two neutrons (tritium). Deuterium, which essentially weighs twice as much as ‘normal’ hydrogen, has found many practical and scientific uses. For example, it can be used to label and track molecules such as proteins to investigate biochemical processes. It can also be strategically used in drugs to reduce their metabolic rate and increase their half-life in the body.

Another important application of deuterium exists in the field of semiconductor electronics. The surface of silicon-based semiconductors has to be ‘passivated’ with hydrogen to ensure silicon atoms don’t come off (desorb) easily, thereby increasing the durability of microchips, batteries, and solar cells. However, through mechanisms that are still not completely understood, passivation with deuterium instead of hydrogen results in desorption probabilities about one hundred times lower, implying that deuterium may soon become an indispensable ingredient in electronic devices. Unfortunately, both the procurement of deuterium and available techniques to enrich silicon surfaces with it are very energy inefficient or require very expensive deuterium gas.

Fortunately, at Nagoya City University (NCU), Japan, a team of scientists led by Professor Takahiro Matsumoto have found an energy-efficient strategy to enrich silicon surfaces using a dilute deuterium solution. This study, which was published in Physical Review Materials, was carried out in collaboration with Dr. Takashi Ohhara of Japan Atomic Energy Agency and Dr. Yoshihiko Kanemitsu from Kyoto University.

The researchers found that a peculiar exchange reaction from hydrogen to deuterium can occur on the surface of nanocrystalline silicon (n-Si). They demonstrated this reaction in thin n-Si films submerged in a deuterium-containing solution using inelastic neutron scattering. This spectroscopy technique involves irradiating neutrons onto a sample and analyzing the resulting atomic motions or crystal vibrations. These experiments, coupled with other spectroscopy methods and energy calculations based on quantum mechanics, revealed the underlying mechanisms that favor the replacement of hydrogen terminations on the surface of n-Si with deuterium: The exchange process is closely related to differences in the surface vibrational modes between hydrogen- and deuterium-terminated n-Si. “We achieved a fourfold increase in the concentration of surface deuterium atoms on n-Si in our experiments performed in the liquid phase,” highlights Dr. Matsumoto, “We also proposed a gas-phase enrichment protocol for n-Si that, according to our theoretical calculations, could enhance the rate of deuterium enrichment 15-fold.”

This innovative strategy of exploiting quantum effects on the surface of n-Si could pave the way to new methods to procure and utilize deuterium. “The efficient hydrogen-to-deuterium exchange reaction we reported may lead to sustainable, economically feasible, and environment-friendly deuterium enrichment protocols, leading to more durable semiconductor technology,” concludes Dr. Matsumoto.

The NCU team also stated that “It has been theoretically predicted that the heavier the hydrogen is, the higher the efficiency of the exchange reaction is. Thus, we can expect more efficient enrichment of tritium atoms on n-Si, which leads to the possibility of purifying tritium contaminated water. We believe that this is an issue that must be urgently solved.”

Let us hope the findings of this work allow us to benefit more from the heavier isotopes of hydrogen without taking a toll on our planet. 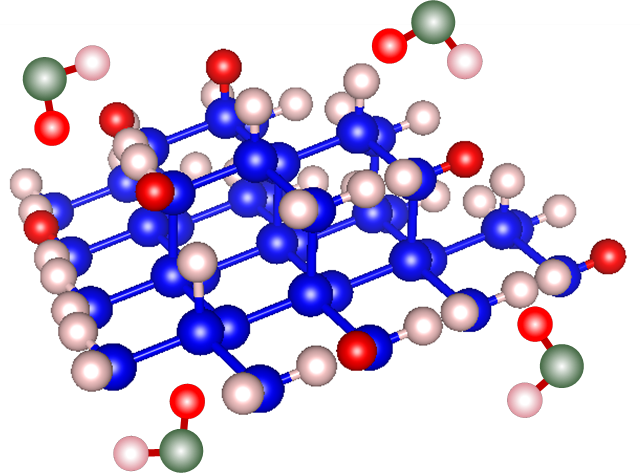 Takahiro Matsumoto has been a Professor at Nagoya City University since 2015. Before this, he researched at Stanley Electric Co., Japan, for 15 years. He obtained a Master’s degree in physics from the University of Tokyo, Japan, in 1988. He is a member of the Society of Muon and Meson Science of Japan and The Japan Society of Applied Physics, among others. He has authored four books and over a hundred papers on the topics of nanomaterials, photonics, optics, quantum electronics, and nanostructure chemistry and physics.

This study was supported by JSPS KAKENHI Grant No. 20H04455 and the Collaborative Research Program of the Institute for Chemical Research, Kyoto University (Grant No. 2020-97).