Scientists detect strongly entangled pair of protons on a nanocrystalline silicon surface, potentially enabling new levels of high-speed computing
Quantum entanglement is one of the most fundamental and intriguing phenomena in nature. Recent research on entanglement has proven to be a valuable resource for quantum communication and information processing. Now, scientists from Japan have discovered a stable quantum entangled state of two protons on a silicon surface, opening doors to an organic union of classical and quantum computing platforms and potentially strengthening the future of quantum technology.
One of the most interesting phenomena in quantum mechanics is “quantum entanglement.” This phenomenon describes how certain particles are inextricably linked, such that their states can only be described with reference to each other. This particle interaction also forms the basis of quantum computing. And this is why, in recent years, physicists have looked for techniques to generate entanglement. However, these techniques confront a number of engineering hurdles, including limitations in creating large number of “qubits” (quantum bits, the basic unit of quantum information), the need to maintain extremely low temperatures (<1 K), and the use of ultrapure materials. Surfaces or interfaces are crucial in the formation of quantum entanglement. Unfortunately, electrons confined to surfaces are prone to “decoherence,”a condition in which there is no defined phase relationship between the two distinct states. Thus, to obtain stable, coherent qubits, the spin states of surface atoms (or equivalently, protons) must be determined.

Recently, a team of scientists in Japan, including Prof. Takahiro Matsumoto from Nagoya City University, Prof. Hidehiko Sugimoto from Chuo University, Dr. Takashi Ohhara from the Japan Atomic Energy Agency, and Dr. Susumu Ikeda from High Energy Accelerator Research Organization, recognized the need for stable qubits. By looking at the surface spin states, the scientists discovered an entangled pair of protons on the surface of a silicon nanocrystal.

Prof. Matsumoto, the lead scientist, outlines the significance of their study, “Proton entanglement has been previously observed in molecular hydrogen and plays an important role in a variety of scientific disciplines. However, the entangled state was found in gas or liquid phases only. Now, we have detected quantum entanglement on a solid surface, which can lay the groundwork for future quantum technologies.” Their pioneering study was published in a recent issue of Physical Review B.

The scientists studied the spin states using a technique known as “inelastic neutron scattering spectroscopy” to determine the nature of surface vibrations. By modeling these surface atoms as “harmonic oscillators,” they showed anti-symmetry of protons. Since the protons were identical (or indistinguishable), the oscillator model restricted their possible spin states, resulting in strong entanglement. Compared to the proton entanglement in molecular hydrogen, the entanglement harbored a massive energy difference between its states, ensuring its longevity and stability. Additionally, the scientists theoretically demonstrated a cascade transition of terahertz entangled photon pairs using the proton entanglement.

The confluence of proton qubits with contemporary silicon technology could result in an organic union of classical and quantum computing platforms, enabling a much larger number of qubits (106) than currently available (102), and ultra-fast processing for new supercomputing applications. “Quantum computers can handle intricate problems, such as integer factorization and the ‘traveling salesman problem,’ which are virtually impossible to solve with traditional supercomputers. This could be a game-changer in quantum computing with regard to storing, processing, and transferring data, potentially even leading to a paradigm shift in pharmaceuticals, data security, and many other areas,” concludes an optimistic Prof. Matsumoto.

We could be on the verge of witnessing a technological revolution in quantum computing! 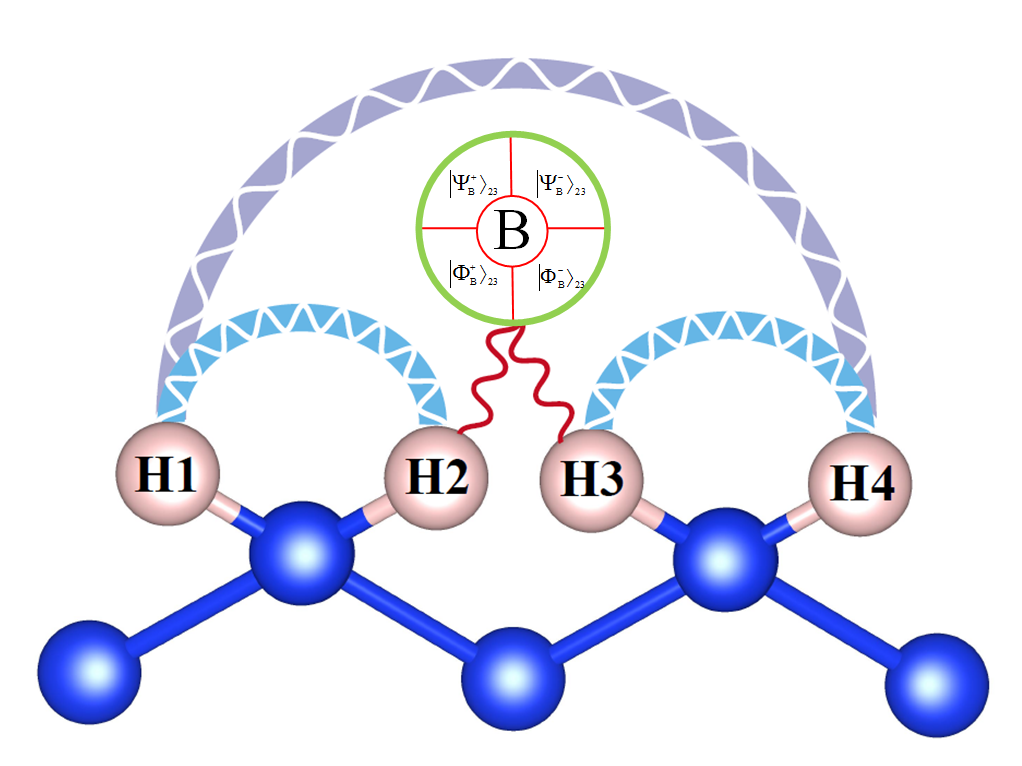 This study shows how quantum entanglement displays a huge energy difference between its states unlike those of molecular hydrogen, promising ultra-fast processing in the order of 106 qubits and atom teleportation (H1→H4).
Image courtesy: Takahiro Matsumoto from NCU, Japan

Dr. Takahiro Matsumoto has been a Professor at the Graduate School of Design and Architecture at Nagoya City University (NCU) since 2015. He received his PhD from the Tokyo University of Agriculture and Technology and worked as a researcher for nearly 12 years at Nippon Steel Corporation and the Japan Science and Technology Agency. Prior to joining NCU, he also worked as a Chief Engineer at Stanley Electric Co., Ltd. for over 4 years. His research interests include optical physics, quantum electronics, and nanomaterials. He has co-authored 4 books and over 100 papers. Prof. Matsumoto has acquired over 200 industrial patents for his outstanding research work.

This study was financially supported by JSPS KAKENHI grant no. 20H04455.