Flotillin is a novel diagnostic blood marker of Alzheimer's disease

November 5,2019
Currently, best-characterized indicators for Alzheimer's disease (AD) diagnosis are the decreased levels of amyloid β-protein 42 and increased levels of phosphorylated tau in cerebrospinal fluid (CSF). The positron emission tomography (PET) imaging with Pittsburgh compound B (PiB) is also used in AD diagnosis by visualizing amyloid deposition in the brain. Because these methods are invasive or expensive, less invasive and easily detectable blood biomarkers are required. Because our previous study showed that flotillin release, a marker of exosomes, was attenuated by Aβ, we designed a present study to determine whether flotillin level could be reduced in CSF and/or serum of patients with AD.
In this study, we analyzed flotillin levels in CSF and serum of non-AD controls, patients with AD and mild cognitive impairment (MCI) by western blotting. Flotillin levels in cerebroventricular fluid (CVF) and serum of AD, vascular dementia (VD), and non-AD autopsy cases are also analyzed. Flotillin levels significantly decreased in the CSF and serum of AD patients compared with those of non-AD controls, respectively. Moreover, in patients with MCI due to AD determined by PiB-PET, CSF and serum flotillin levels significantly decreased compared with those of patients with MCI due to non-AD. Flotillin levels remained unchanged in CVF and serum of autopsy cases diagnosed as VD. Serum flotillin level is negatively associated with brain amyloid deposition indicated as PiB uptake. These results demonstrate that serum flotillin level can serve as one of the blood markers for estimation of brain amyloid deposition and early diagnosis of AD.

Figure 1) Serum flotillin levels in patients with AD were lower than those in non-AD cases. 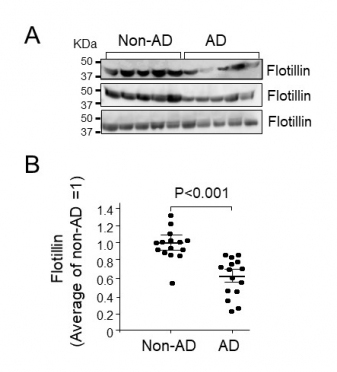 Flotillin in serum collected from patients with AD and non-AD cases was examined by western blot analysis. Intensity of flotillin bands was quantified using Image J. A, The representative results analyzed by western blot are shown. B, The quantitative analysis was performed and relative value of intensity of each band was normalized by the average value of flotillin in patients with non-AD as 1. Non-AD group, n=15; AD group, n=15. Data are mean ± S.E.M. Statistical analysis was performed by ANOVA.

Figure 2) Serum flotillin levels in autopsy cases with AD were lower than those in cases with vascular dementia (VD). 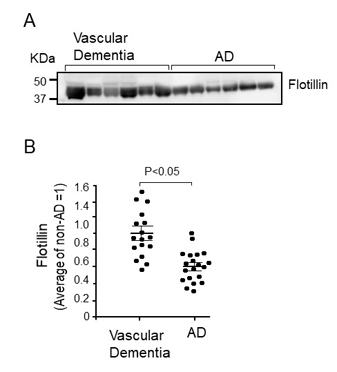